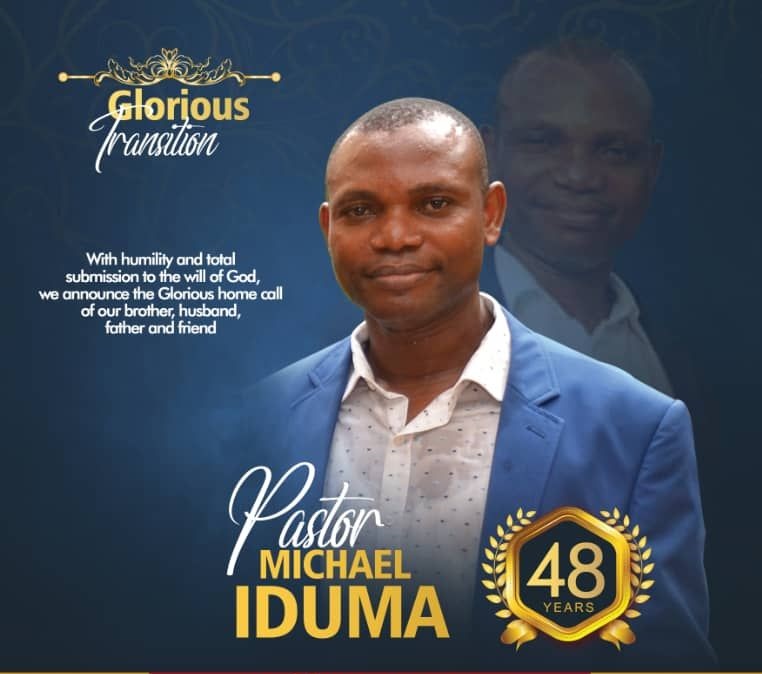 For if we believe that Jesus died and rose again, even so them also which sleep in Jesus will God bring with him- 1 Thessalonians 4.14

Precious in the sight of the Lord is the death of his saints – Psalm 116.15

We of the Watchman Catholic Charismatic Campus Fellowship give all glory to the omniscient, omnipresent and omniscience God who has permitted an esteemed colleague and co-labourer to drop his tools and return home. Pastor Michael Iduma started as the Campus Pastor of ESUT and grew to become the Diocesan Campus Pastor for Enugu Diocese. He relinquished the position when it became practically impossible for him to faithfully combine the responsibilities with those of his newly appointed offices of a District Pastor and dependable helper in the Diocesan work. However, his dutiful wife, Mummy Chika Iduma, remains the Diocesan Campus Sisters Coordinator till date. Pastor Mike also served as the national officer in charge of accommodation at our national and international conferences. He remained the patron of the campus work and father to the brethren till his unexpected departure on the 15th day of April.

Pastor Mike loved God and the House of God passionately. He was a father-figure to the Campus Coordinators and the brethren at large.  He derived fulfilment in sheltering and caring for students as his own children. His house was a resort for brethren. Even after graduation, the brethren looked up to him for guidance and moral support. To these tens and hundreds of student-brethren that he has nurtured, his departure leaves a void that cannot be easily filled.

For those of us ministers in the Watchman Campus Fellowship, past and present, and all who have worked closely with Pastor Mike in the ministry, his departure is a price too dear. Humility, gentility, selfless zeal, doggedness and meticulous rigor were some of the enviable qualities he brought to bear on any assignment he was given. We worked together in the same love. He was loyal to authority. Sure, Heaven’s gain, in Pastor Mike’s case, is our earthly loss!

While we all take solace in our assurance of his eternal joy, his glorious legacies and the enormous goodwill he left behind, let us anchor our confidence in the ever-living God who is sufficient for all His creatures. Our heart goes to Pastor Mike’s immediate and extended family as well as the Watchman Church. We condole with our dear sister and darling wife of our departed hero, Mummy Chika Iduma, and the children. We condole with Pastor Mike’s mother, brothers and siters, uncles, in-laws and all to whom he is dear, and who feel the void and share the grief of his flight. Please, take note that known unto God are all His works from the beginning of the world (Acts 15.18). There is no contingency in God’s program. He is the Rock and there is no unrighteousness with Him (Psalm 92.15). Cheer up in the Lord!